We use cookies to remember choices you make on functionality and personal features to enhance your experience to our site. By continuing to use our site you consent to the use of cookies. Please refer to our privacy and cookie policies for more information 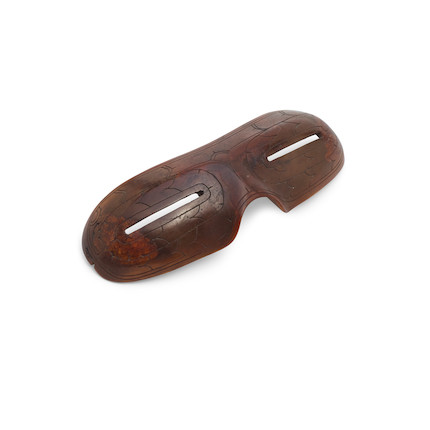 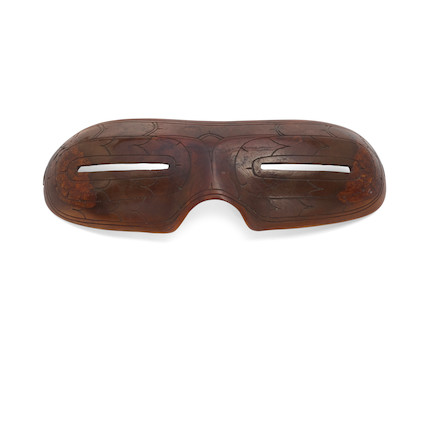 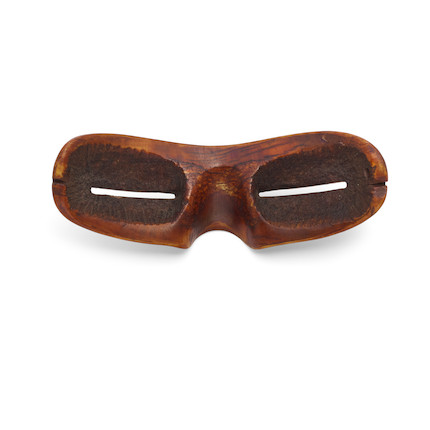 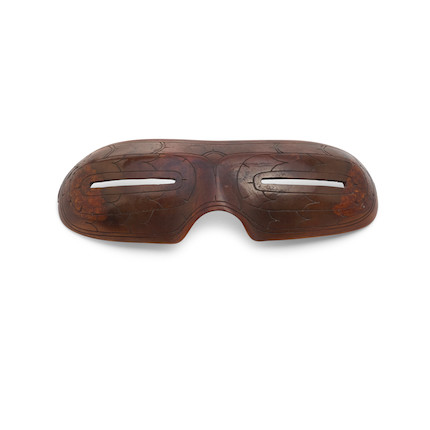 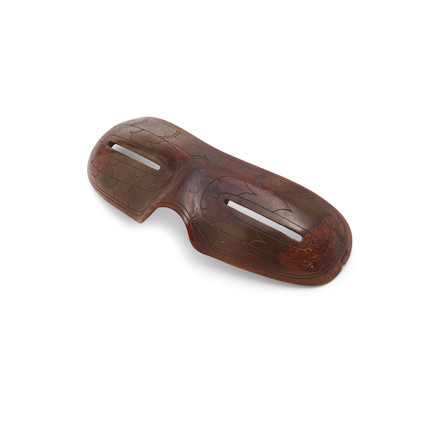 Ask about this lot

Birnirk or Punuk, circa 500-1000 A.D., of finely carved walrus tusk, the gently curved mask-like form mirroring the streamlined contours of the face across the eyes and bridge of the nose, the surface worked to incorporate the crystalline core of the tusk for aesthetic effect, concentric incised lines framing the narrow orbital slits and outer borders, curved and hooked design elements as accents, the interior with deep cavities for the eyes roughly worked to minimize glare, pierced at each end for attachment.
length 5 1/4in, width 1 3/4in

Provenance
Acquired circa 1960 by the spouse of the present owner, in trade through an acquaintance conducting research in the vicinity of the present-day settlement of Utqiagvik (Barrow), just south of Point Barrow, Alaska

See Wardwell, Allen, Ancient Eskimo Ivories of the Bering Strait, 1986, Hudson Hills Press, New York, p. 106, fig. 136, for perhaps the closest comparable example to the present lot in terms of refined aesthetic and graceful execution. Found on St. Lawrence Island in the early 1980s and formerly in the private collection of Richard and Gloria Manney, that pair of goggles shares some basic design elements with the present lot in the use of chevron-form motifs, but atypically presented in an asymmetrical arrangement.

See also: Ibid, pp. 85-86, fig. 95, for a geographically related example, presumably predating the present lot and found in the collection of the Royal Ontario Museum (object number HC1775 - further accessible online through the Museum's collections database). Wardwell describes that pair as having been "Excavated by Charles Brower 'four feet from surface... in ruins of an old house at Berniak (sic), six miles north of Cape Smythe and one-half miles south of Point Barrow' (quoted from the museum catalogue.) Acquired by the museum in July 1912. The provenance of these goggles indicates that the Old Bering Sea culture reached as far north as Point Barrow."

See also: Sukhorukova, E. S., "The Question of a Unified Birnirk-Punuk Artistic Tradition in the Eskimo Art of Chukotka," 2006, Alaska Journal of Anthropology, Volume 4, Numbers 1-2, p.29: "One of the chief features of the Birnirk/Punuk style is a rejection of decorative motifs and its replacement by the transmission of forms predominantly through plastic means. But in artistic design, many artifacts show clear genetic connection with Old Bering Sea art. The type of design, usually considered early Punuk, represents in fact a schematic treatment of Old Bering Sea subject matter or compositions. In turn, these schematic renderings probably served as the basis for the typical Punuk motif."